Next week Jerry and I will be married for 12 years.  That went by fast!  Last night we were reminiscing about our courtship and when I made risotto for the very first time. 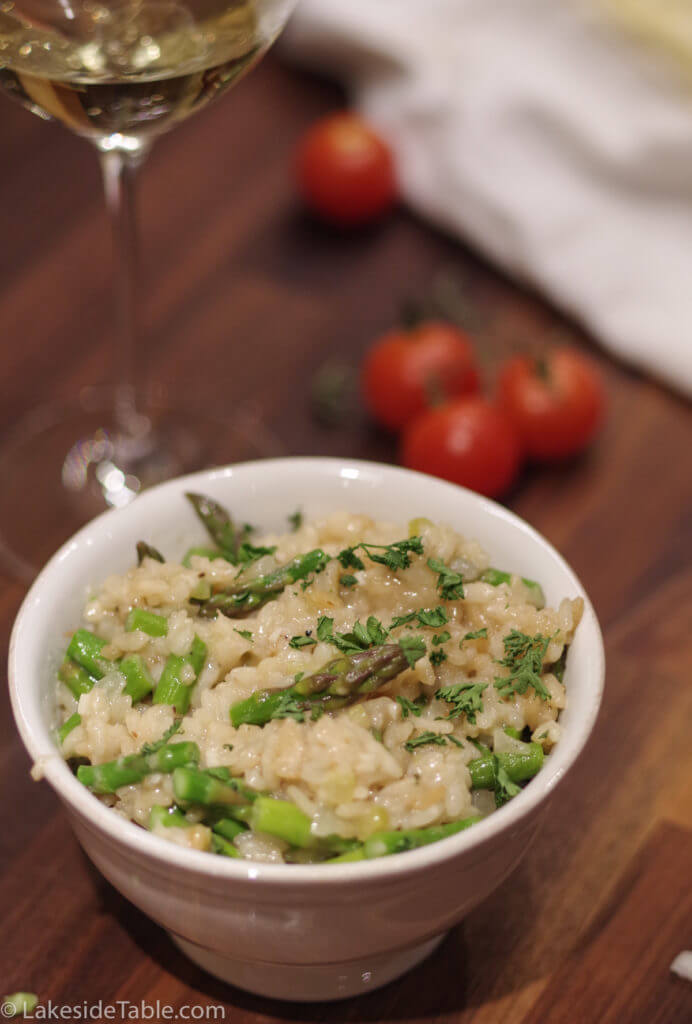 One of the many things I love about Jerry is how old fashion he is.  Have you seen the movie  Swingers (1996) with Vince Vaughn and Jon Favreau?  It’s a classic.

One of the many hilarious mishaps in the movie is when Jon Favreau’s character, Mike, neglects the “cool man dating code” to wait 3 days before calling a girl to ask her out and instead leaves an ungodly amount of messages on her voicemail.

Jerry never did that, but he never left a date without making plans to see me again.  Sigh… I’ve loved that man since the first day I laid eyes on him!  Anyhow, on one of our first dates, we went on a picnic. 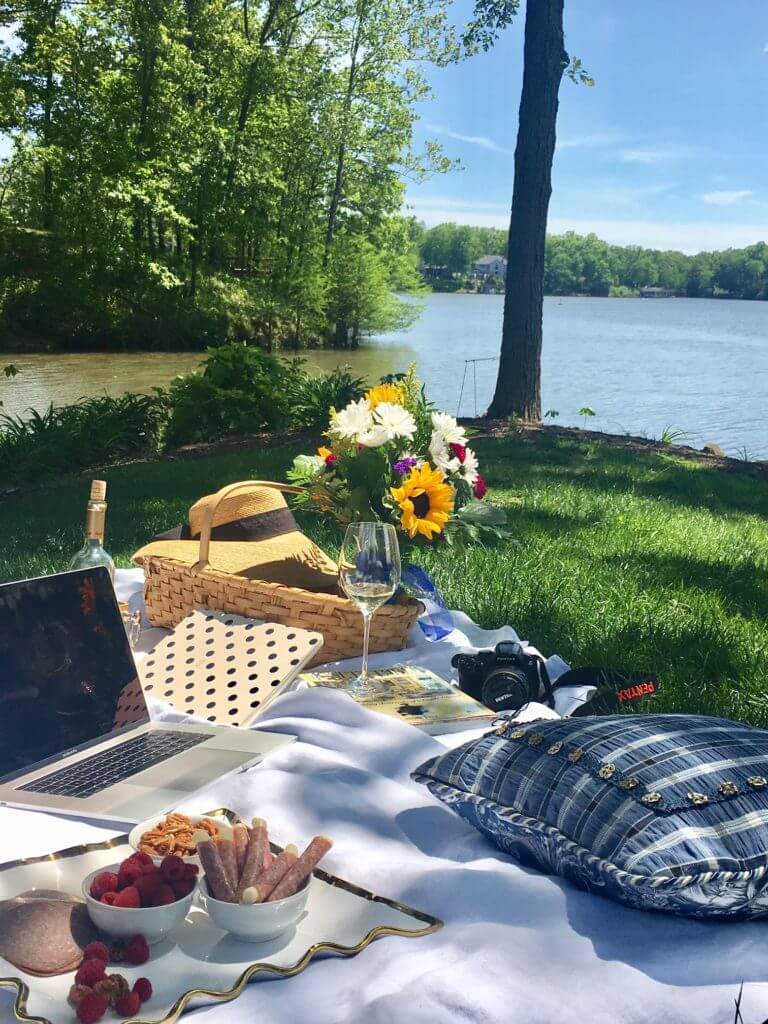 Packing for the Picnic

Jerry always picked me up and, like a true gentleman, he always picked up the tab on all of our dates.  Since I wanted to reciprocate, I suggested a picnic at a nearby park and I would bring the basket of goodies.

I wanted to treat him for a change.  There are not many things more romantic than a picnic.  I adore picnics! 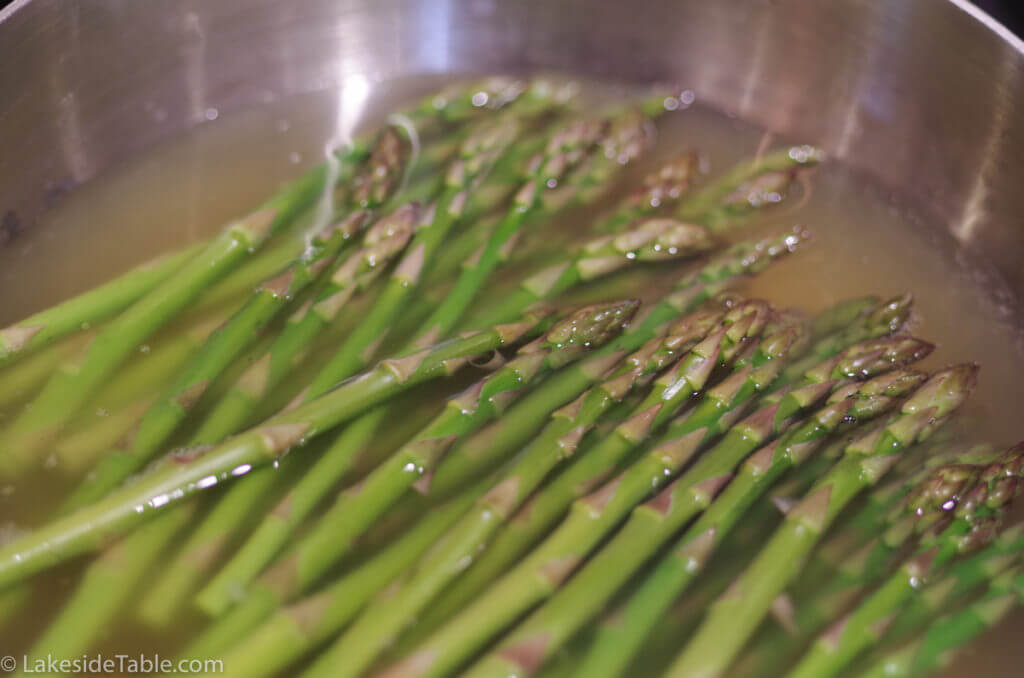 Another wonderful thing about my sweetheart is that he is always, without exception, early.  Knowing this, I had my big hat, blanket, and basket at the door ready to go.

In the basket was french bread, grilled chicken, green beans, wine, cookies, fruit, and (wanting to really impress him) I decided to make risotto… at the last minute.  Because, really, what’s a picnic without risotto? 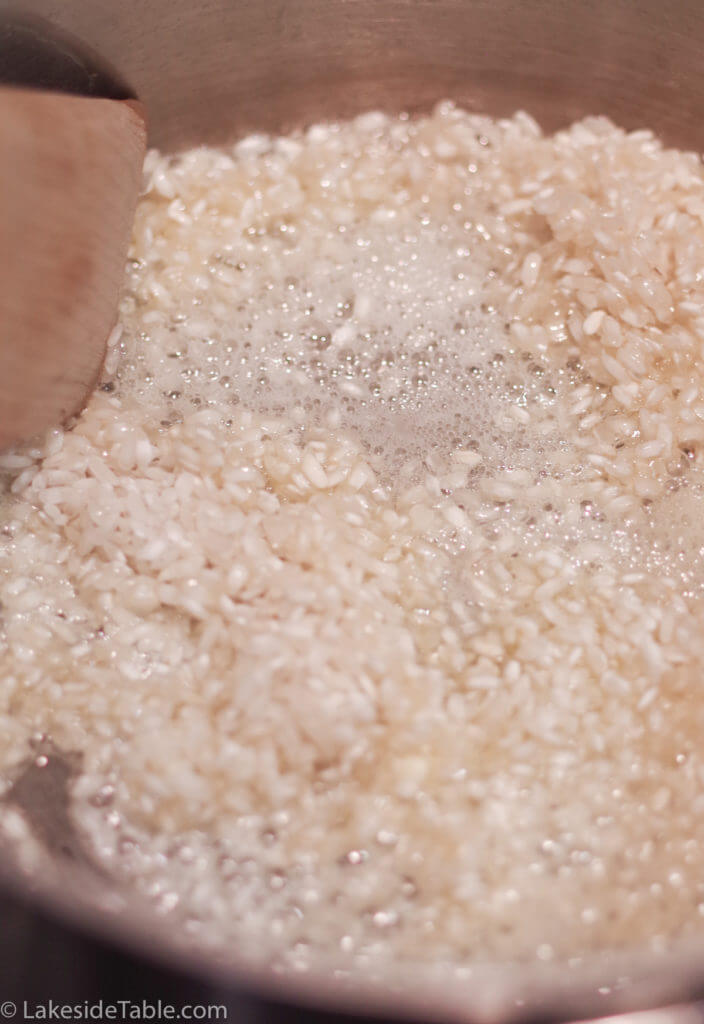 Had I ever made risotto before?  No, of course not.

However, I remembered an Alton Brown Good Eats episode about risotto.  On that show, he uses an electric kettle to keep the chicken broth hot as he slowly added it to the rice.  Super smart and very convenient.  What a great tip!

Here’s another great tip: make sure your electric kettle is working properly.

As I was stirring the rice and onions together in the pot with the butter, the broth was coming up to a boil in the kettle.

I knew I was going to be a little late, but I was convinced the risotto would be worth it.  In a few minutes, I planned on calling Jerry to give him a heads up to let him know I was running a little late.

I swear I only turned my back on the kettle for a nano second.

When it rains, it pours.

When I checked on it again, I saw the kettle spewing boiling chicken broth in an 12 inch arc up and onto my counter.  It was a scalding waterfall splashing all over my kitchen floor!

And wouldn’t you know, directly underneath that golden arch of boiling broth was my cell phone! 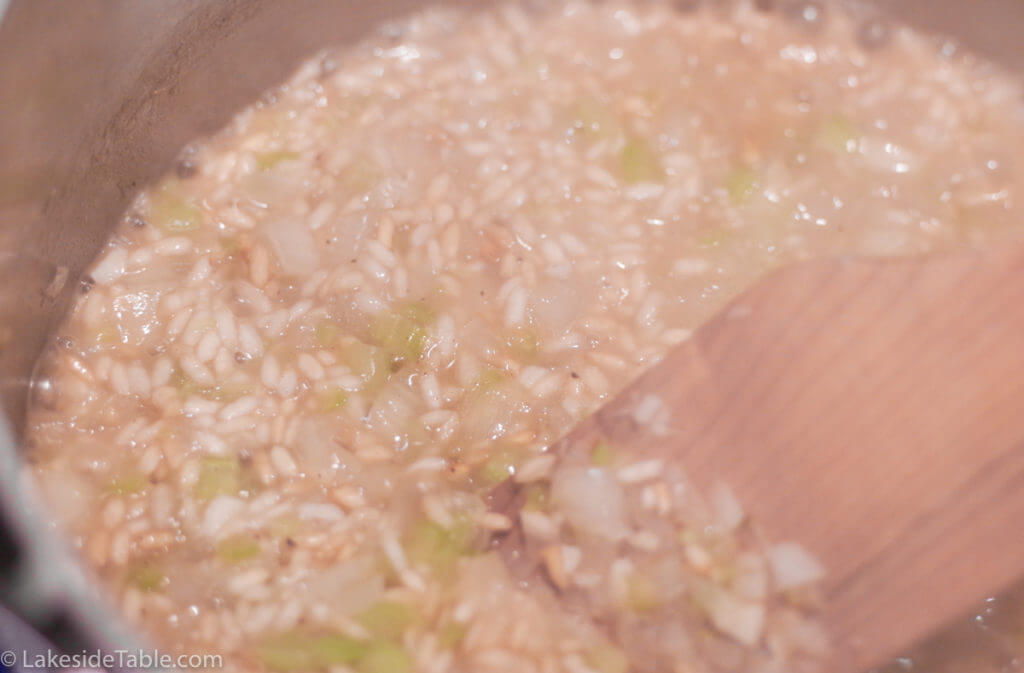 Now I was 10 minutes late and no where close to being done.  I was so angry at myself and at my stupid kettle!

Unfortunately, when I get angry I get stupidly stubborn.

At this point, it was only natural that I was obstinately determined to finish making the risotto.  Finally when it was done I crammed my big ass hat on my big ass head, threw everything into the car and drove like a maniac 3 blocks to the park.

I was over a half hour late.  Jerry had driven over 2 hours and had been waiting for close to an hour.  Ack!

Luckily, I saw him in the park immediately.  He was leaning against a tree.

Waving wildly as I ran up to him, I apologized profusely and told him I boiled my phone in chicken broth and wine and couldn’t call him to let him know I was going to be late.  Thank goodness he waited! 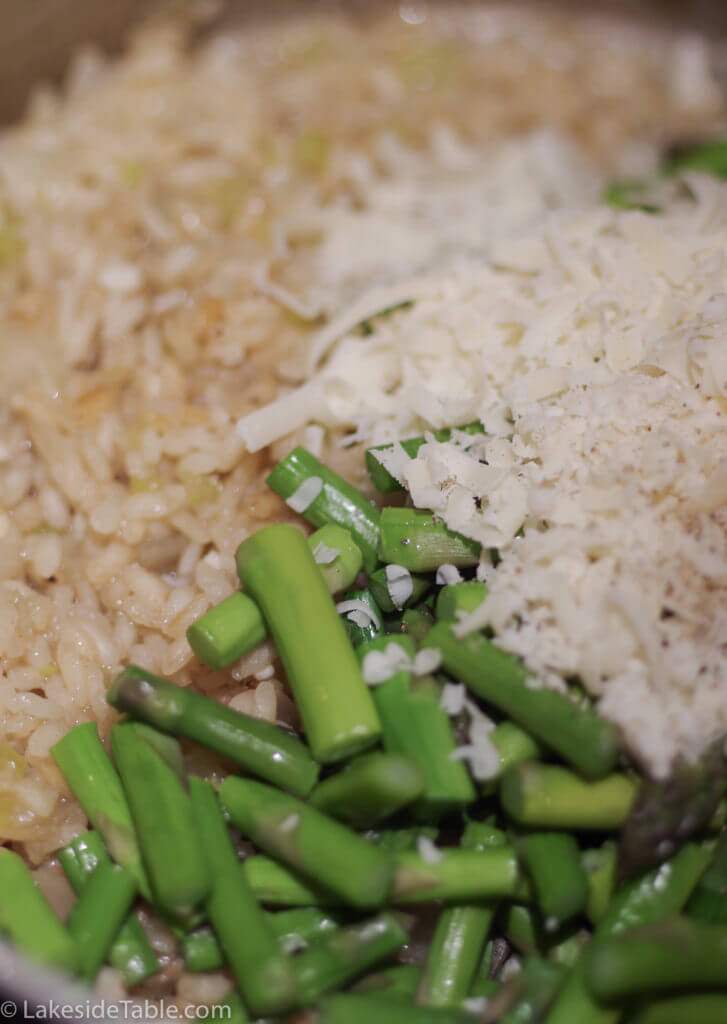 I hope you enjoy this risotto around your kitchen table and not on your next picnic. 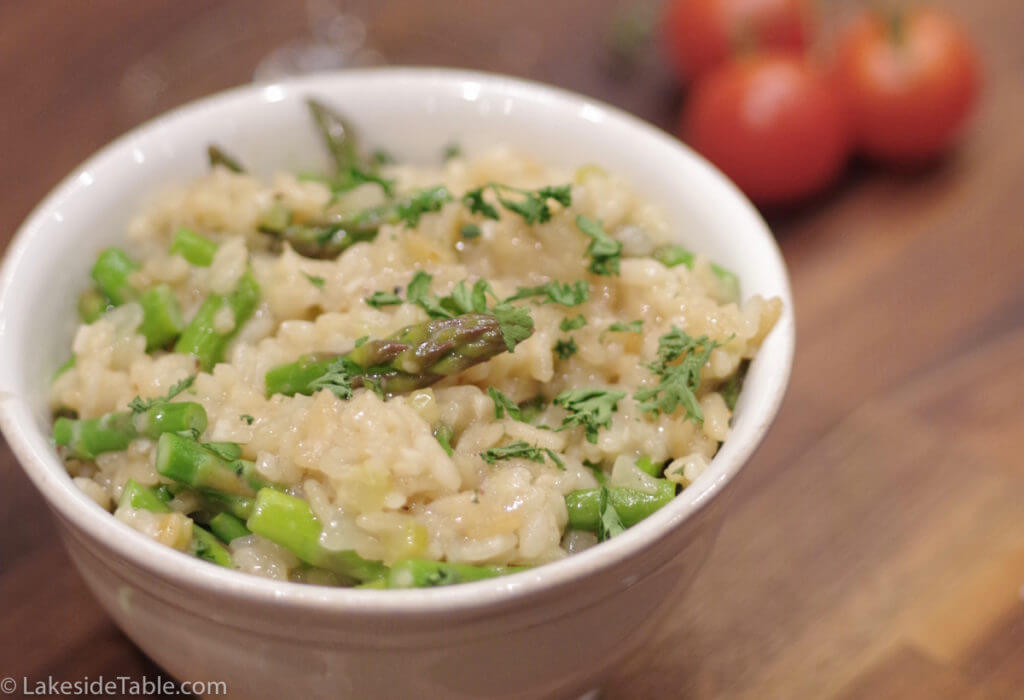 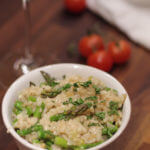 The bright, fresh flavors of asparagus and lemon permeate this creamy rice dish.  Try not to rush this dish, it is WORTH the time it takes to make it!  | www.lakesidetable.com
Course Side Dish
Cuisine Italian
Prep Time 15 minutes
Cook Time 30 minutes
Servings 4 servings
Calories 287 kcal
Author Madalaine 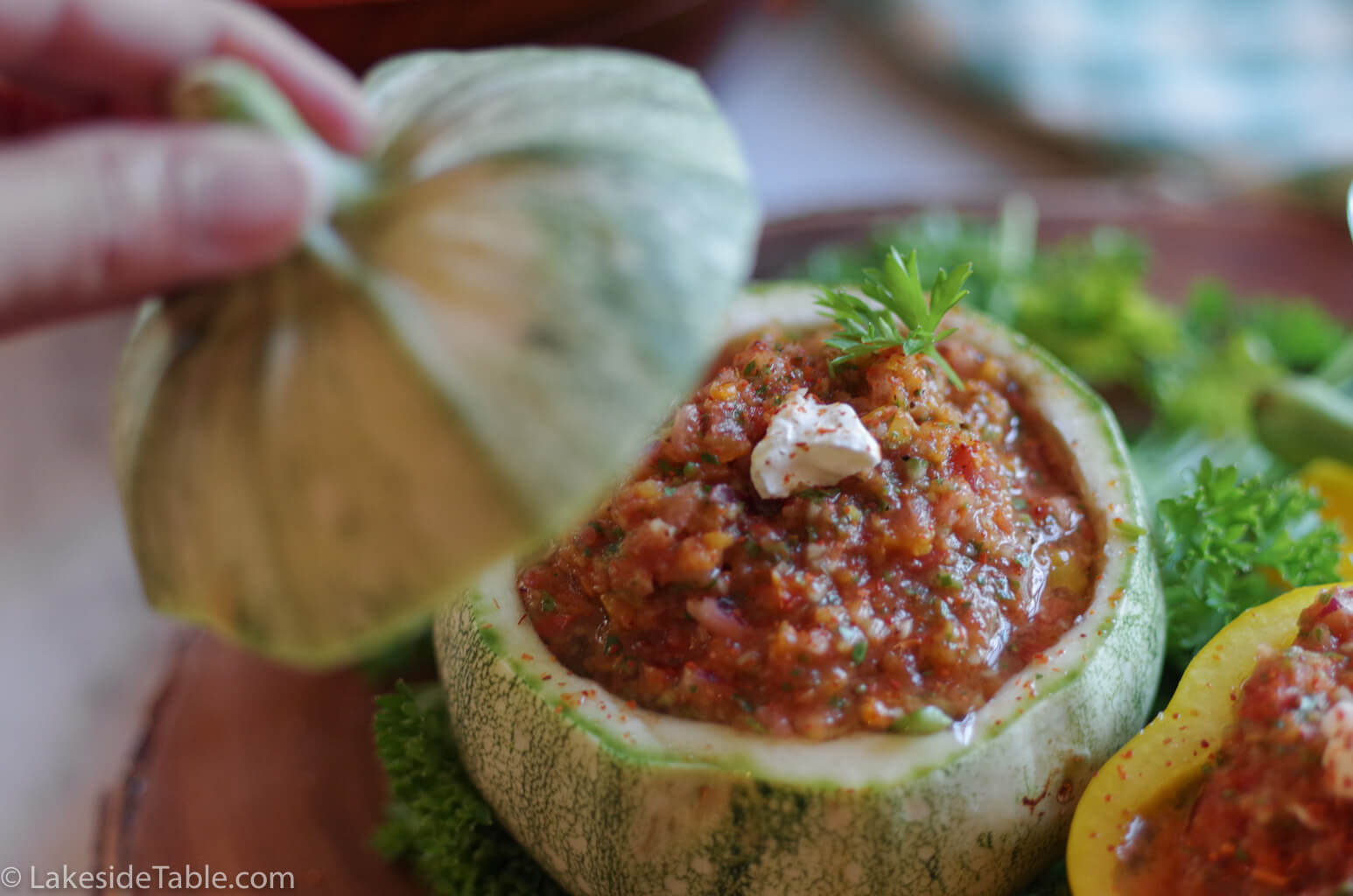 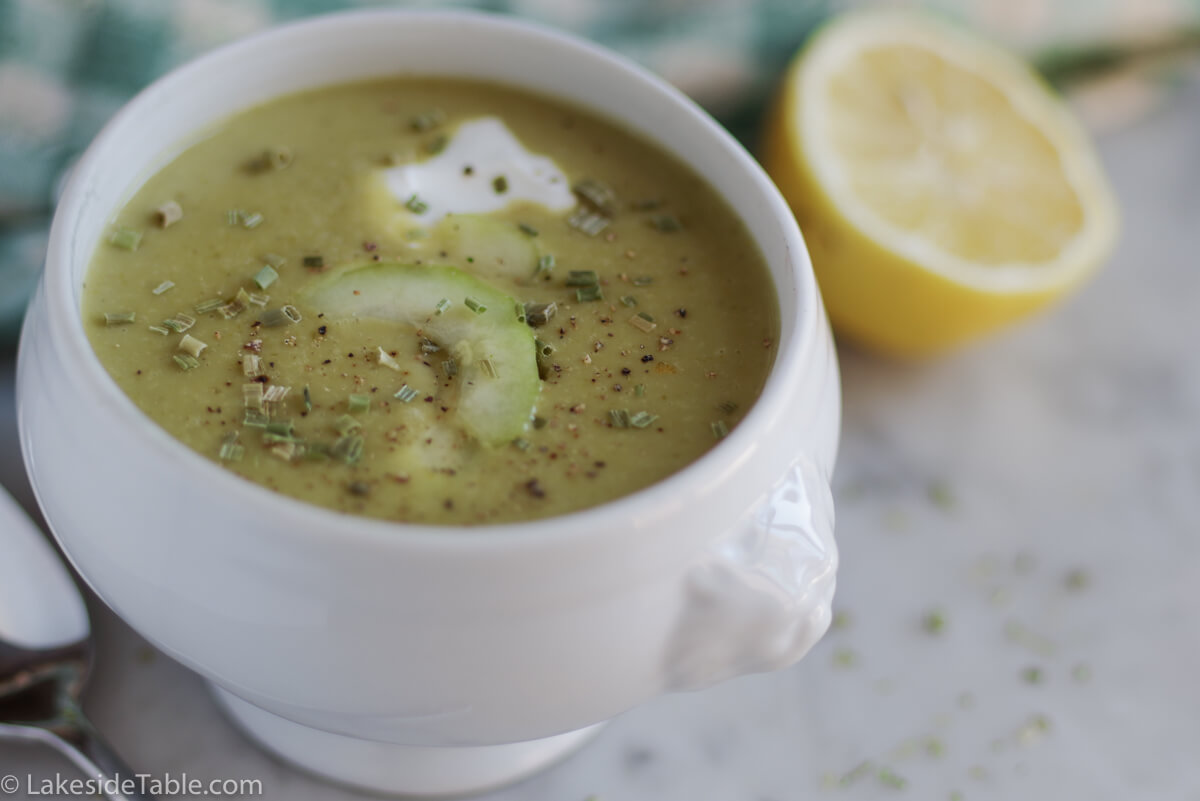