Have you ever enjoyed a Tasting Menu?  Simply put, a Tasting Menu is an extraordinary dining experience comprised of anywhere between 4 and 16 courses.  It’s a chance for the chef to expand their wings, get creative and show off some spectacular skills.  And the New Year’s Eve Tasting Menu at the Firefly Grill is no exception!  And… the Firefly Grill is giving away 2 FREE TASTINGS (see how to enter at the bottom of this post!) 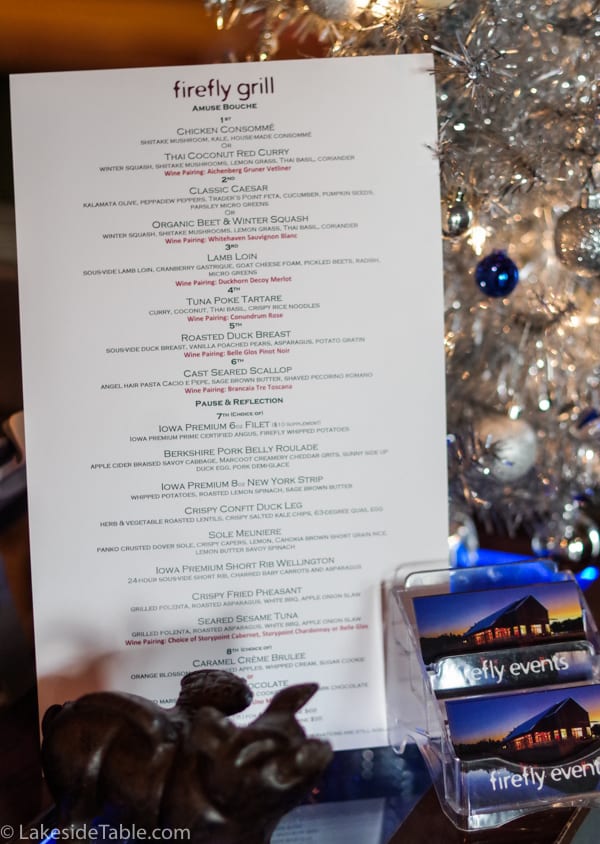 Last week I sat down with Chef Niall in the Firefly’s wine room.  We sat under the antler chandelier in full holiday garb and I got to take a peek into his culinary wizard’s brain as he shared his creative process and how he’s developing the tasting menu for this New Year’s Eve. 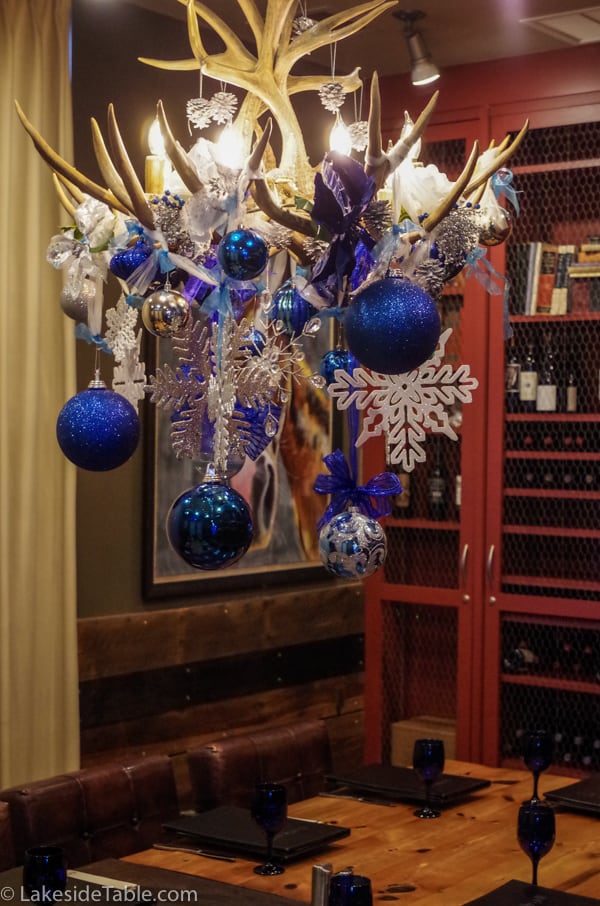 The wine room at the Firefly

Today I went back to the Firefly into the kitchen to take these pictures.  It was like stepping into the Emerald City from the Wizard of Oz.  Everyone was hustling and bustling, each intent on their duties.  I stood back and admired the dance.  We’re 2 ½ weeks from New Year’s Eve (several lifetimes in the restaurant business) but preparations are already under way.  Just like in the land over the rainbow, this is where the magic happens. 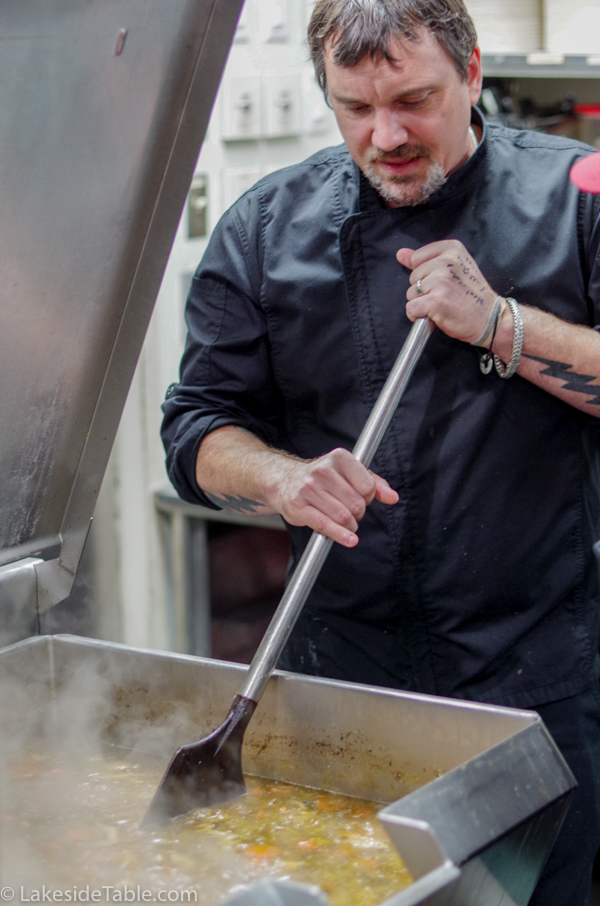 Chef Niall stirring chicken stock… this will be the base for the 1st course: Chicken Consommé

Mada: Where do you start when thinking about a New Year’s Eve Tasting Menu?

Chef Niall:  The thought process really started about 2 months ago.  Before I got to bed at night, sometimes I’ll just sit there and think.  I’ll wake up in the middle of the night thinking about it.  Other nights I’ll flip through several of my favorite cookbooks and just let the ideas flow until it all comes together. 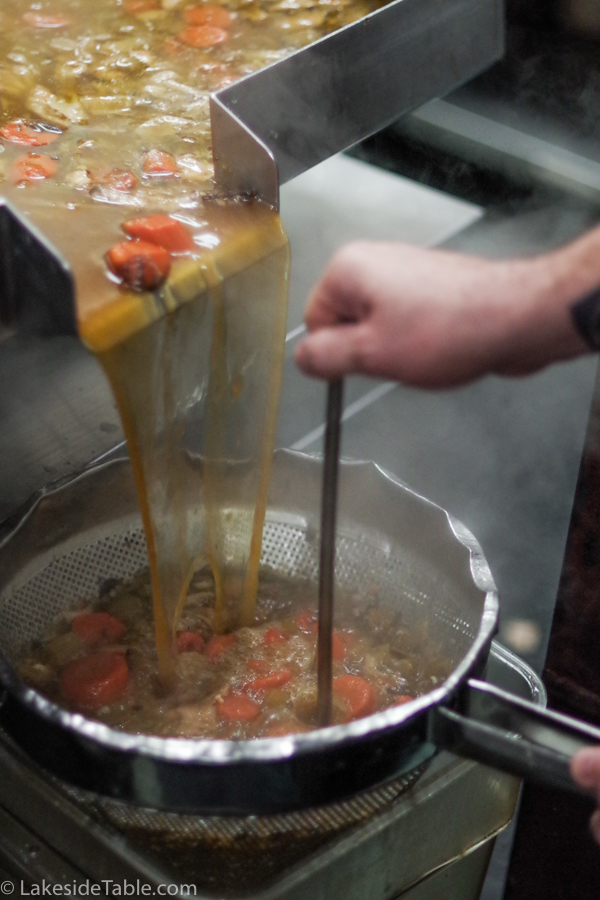 “Always be passing” is a common saying in the Firefly Grill’s kitchen and it has nothing to do with basketball. It’s a reminder to constantly strain, strain, and strain again in order to obtain the cleanest and clearest stock.

I let all these things come together until a phrase comes to mind that brings it altogether.  The one thing that I’m noticing about the phrase for this New Year’s Eve menu:  Comfort Savvy.

Mada:  I love that!  It’s comfort food but it’s elevated?

Chef Niall: Exactly.  I’m noticing that everything I’m doing this year has got a lot of flavor and a lot of comfort behind it.  We’re still in the design phase.

The New Year’s Eve Tasting Menu is really a reflection of the past year for me.  It’s a chance for me to think of everything we’ve done as team as well as what we’ve experienced as a family.  And when they get to the main course there’s a choice involved.  There’s a choice of 5 or 6 different items, so that gives me a lot of room to be creative. 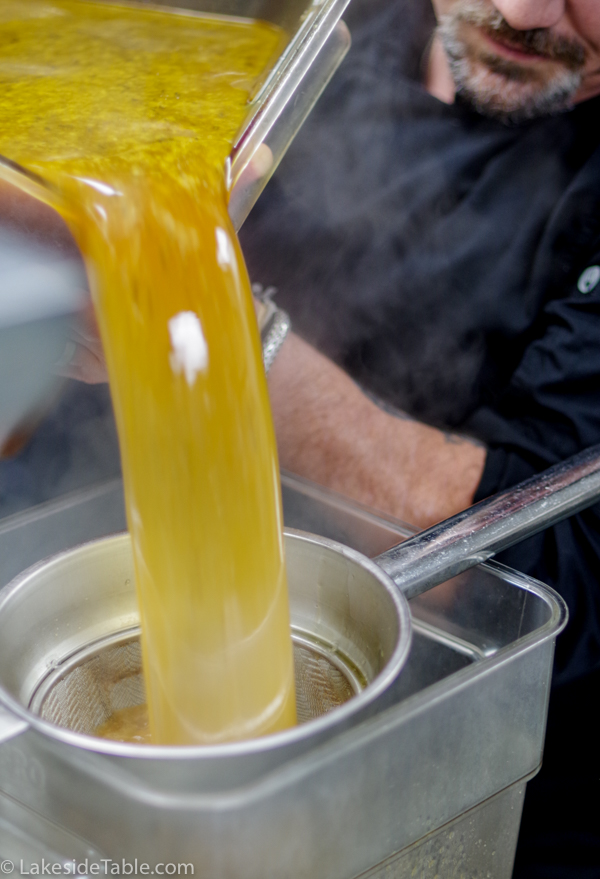 This is the 2nd straining (or passing) of many the stock will receive.

Mada:  How do you pick how many courses to offer?

Chef Niall: Typically, I take time into account.  Kristie and I enjoyed a 16 course tasting menu not long ago and it took nearly 4 hours.  By the end of it, I was itching to go. (laughing) I don’t know if it was because the Patriots were playing or what, but we were both more than ready to go by the end of the meal. 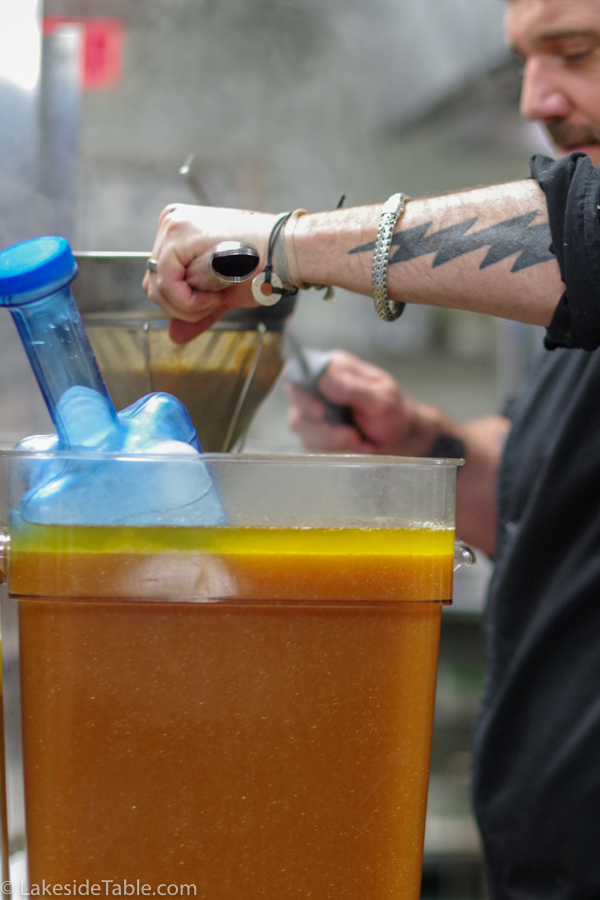 The blue thing in the stock is called an ICE WAND. It’s used to quickly bring down temperatures. When the stock is completely cooled, the top layer of fat is removed.

This year for our New Year’s Eve menu, we’re offering our guests a choice of 4, 6, or 8 courses, with or without wine pairings.  That way people can enjoy the experience for the length of time that’s comfortable for them.

Mada: How do you come up with the different courses?  Where do you find your inspiration?

Chef Niall: Last month we took the team to Longman & Eagle in Chicago and we had this short rib that was stupid good.  I haven’t quite finalized this year’s menu, but I’m thinking we are definitely going to do a boneless beef short rib.  I’m going to smoke it, then slowly cook it in the sous vide for 24 hours.  I’m very excited about it.  We’re also preparing a duck breast that we’ll sous vide for about 18 hours. 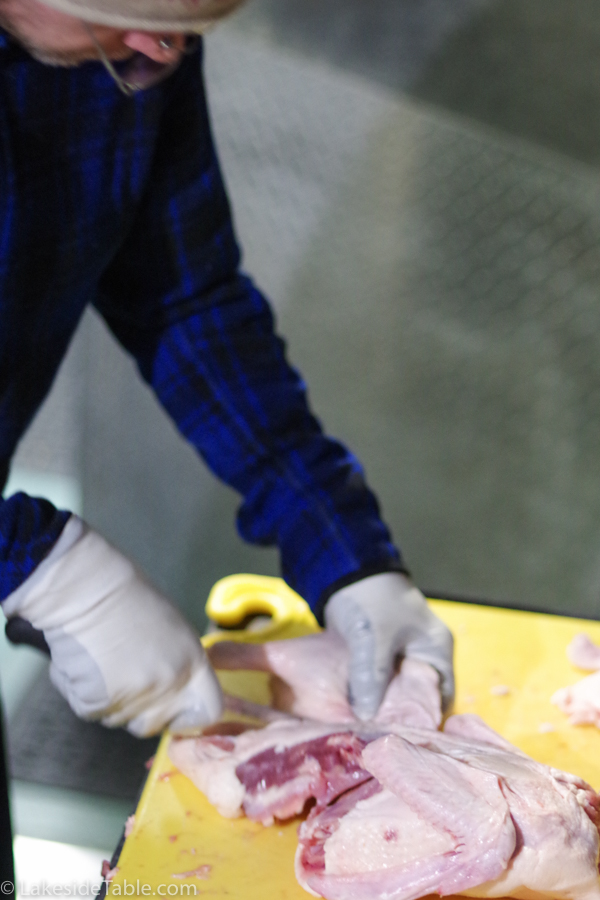 Anthony is preparing the ducks for the big night!

That will give us a perfect medium duck breast, then when we pick it up for order it will go into a very hot pan to render off the fat that comes out of the breast, then we’ll put thin slices on them.  So you’ll have a perfect duck breast, crispy duck fat and serving it with pressed pairs and potato gratin.

Come back next week for our continued Firefly Grill New Year’s Eve Tasting Menu sneak peek.  Chef Niall shares his favorite part of the menu and how he brings to life an entire year in just one bite!

Email maryelaine@ffgrill.com your most hilarious holiday cooking disaster story and the top 3 will be voted on a FaceBook poll!  Good luck!!! 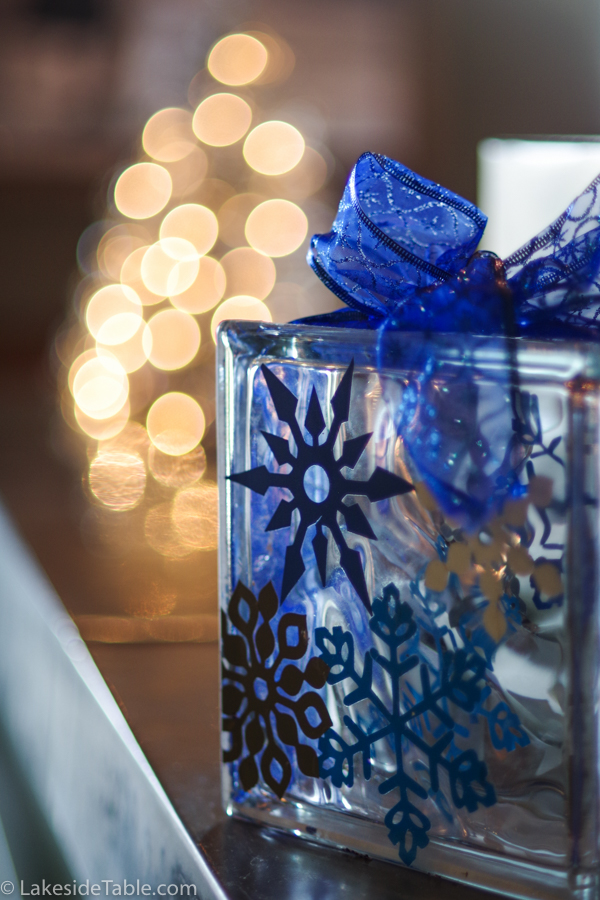