Firefly Grill in Effingham, IL has been a Farm to Fork restaurant ever since their first garden. 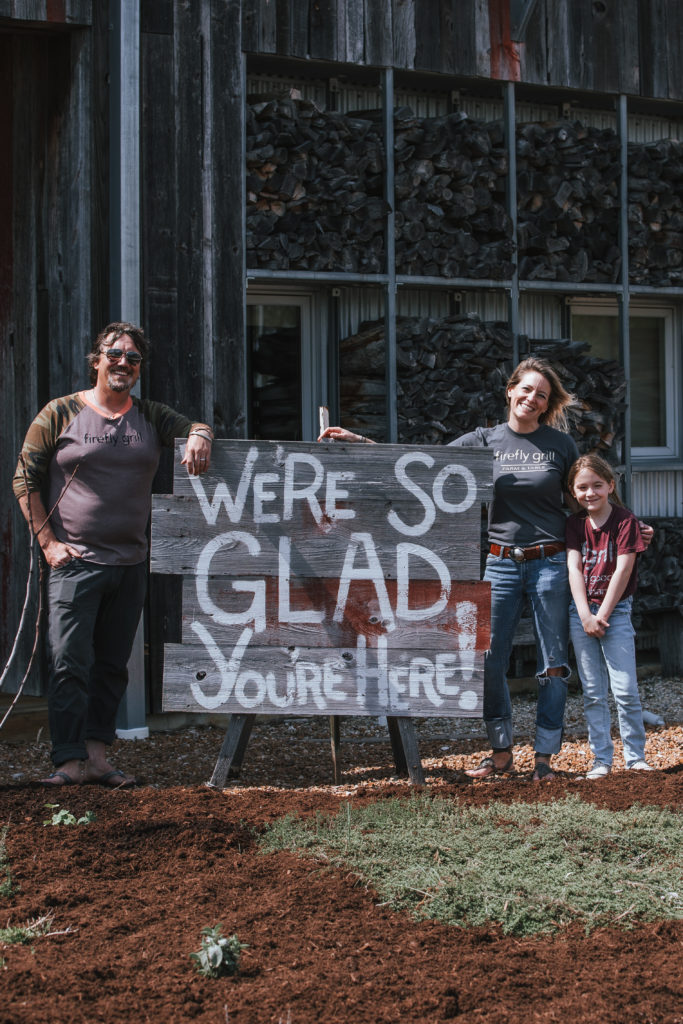 The following is the chat I had with Chef Niall in the restaurant’s wine room about their plans for expanding the farm, pesky challenges, the creative process that goes into planning a restaurant garden and what made he and Kristie decide to start a farm to fork experience. 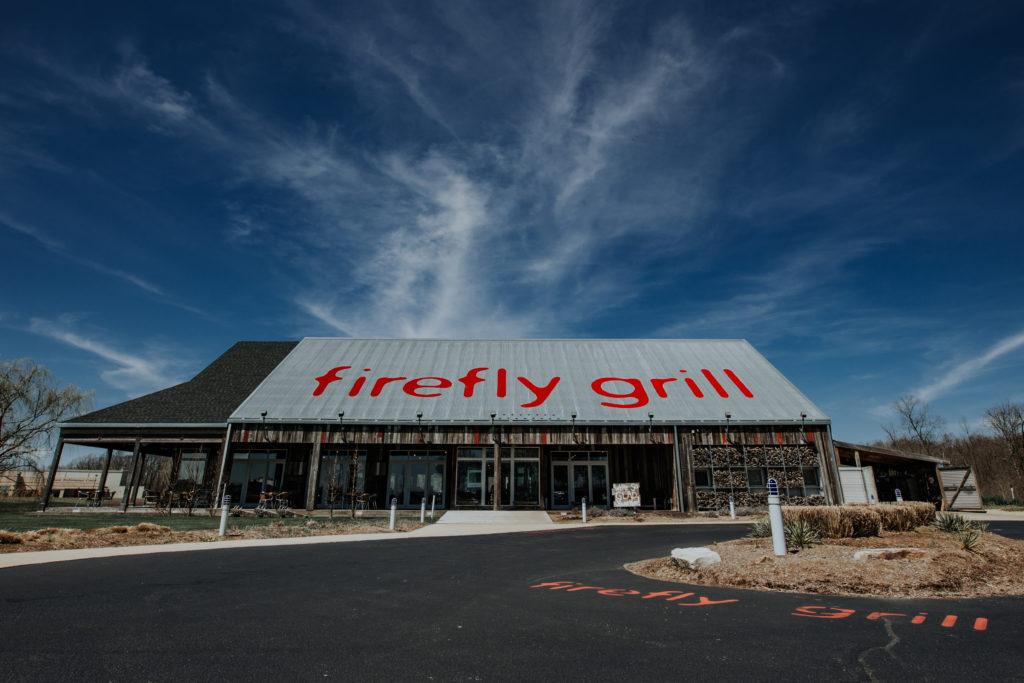 The Firefly photos in this article are by the truly talented Steffen Harris.  Thank you, Steffen!

This post is a little different from my usual ones. You won’t find a recipe at the bottom of this one.  However, after chatting with Chef and working in the back of the house for my culinary internship, I was inspired to recreate Firefly Grill’s pickled jalapeño poppers.  Yum! 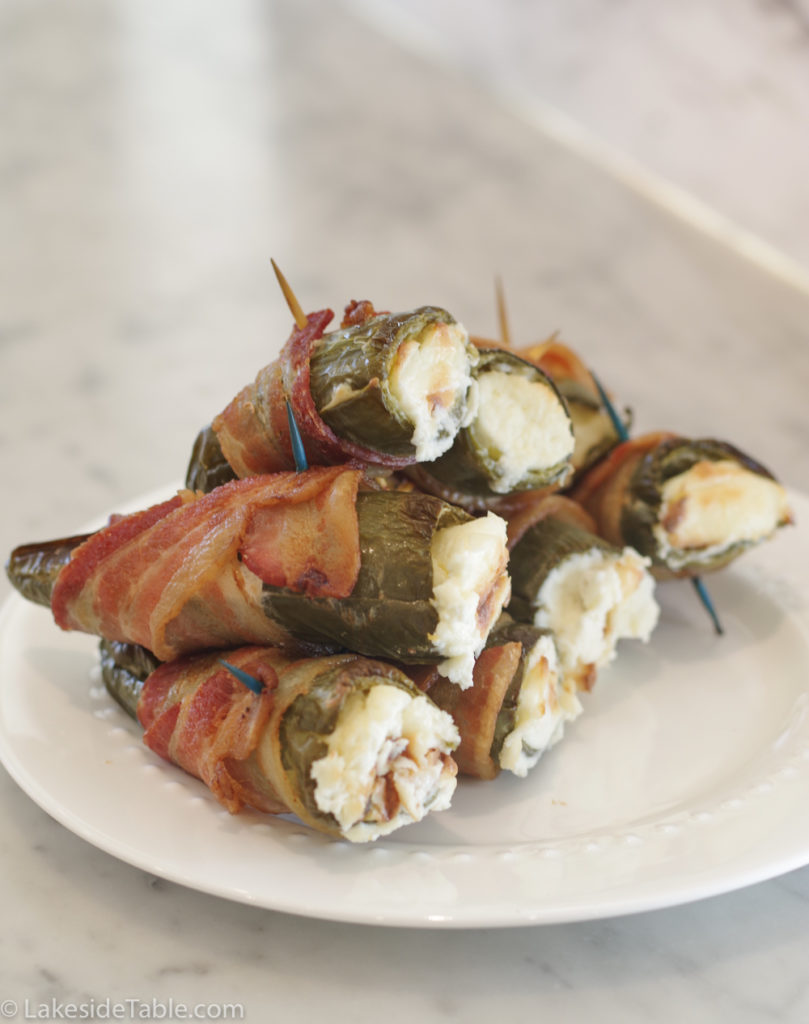 I added a little spin on it by including a savory raspberry dip that partners beautifully with their spicy kick.  If you’d like it try it out, you can find it here. 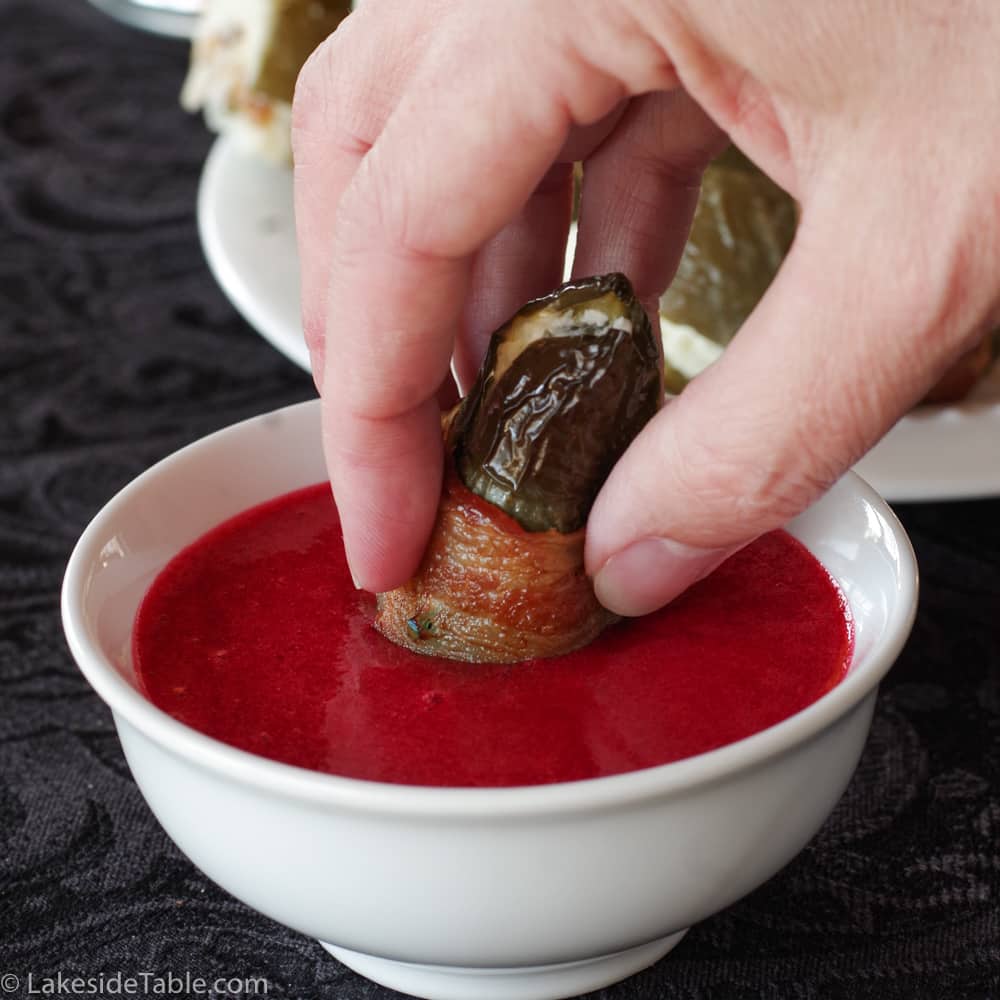 The First Firefly Garden ~ from garden to farm

Madalaine: What was the land like here when you put in the first garden?

Chef Niall: When we first started the garden, the soil was just dead.  There was not topsoil.  Nothing.  We brought in 12 tandum loads of topsoil and 4 tandum loads of mushroom compost, just to get the first base down.

We tilled all that in and planted out fescue for a cover crop.  It was a 3 year process before we could put any plants in the ground. 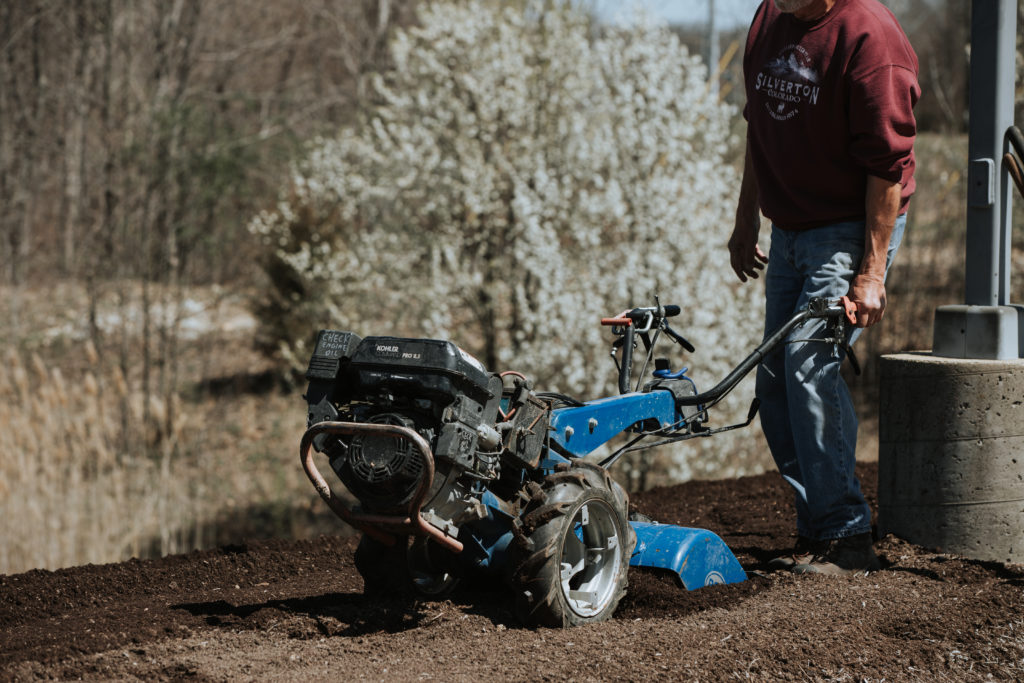 Every year we add back into the soil.  We enrich the soil as needed with mushroom compost only and mulch.  We rotate the vegetable to rest and replenish the soil in a 3 year cycle.

After working and tilling the soil for the past 15 years, the soil next to the building is incredibly rich 3 feet deep.

Every crop gets better and better because we keep giving back to the land, tilling, composting, and rotating. 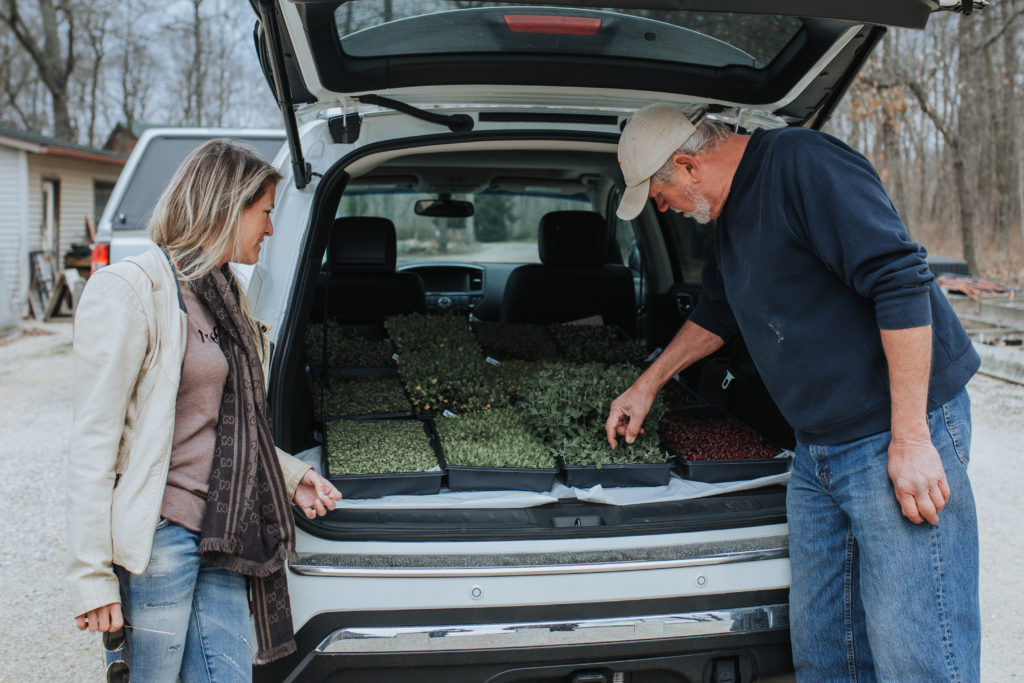 Madalaine: How do you even begin wrapping your head around what to plant and how that will play into your menu for the year?

Chef Niall:  I truly believe that you’ve got to start with the best ingredients possible, then get out of their way.  Give me fresh products and then let me work from there. 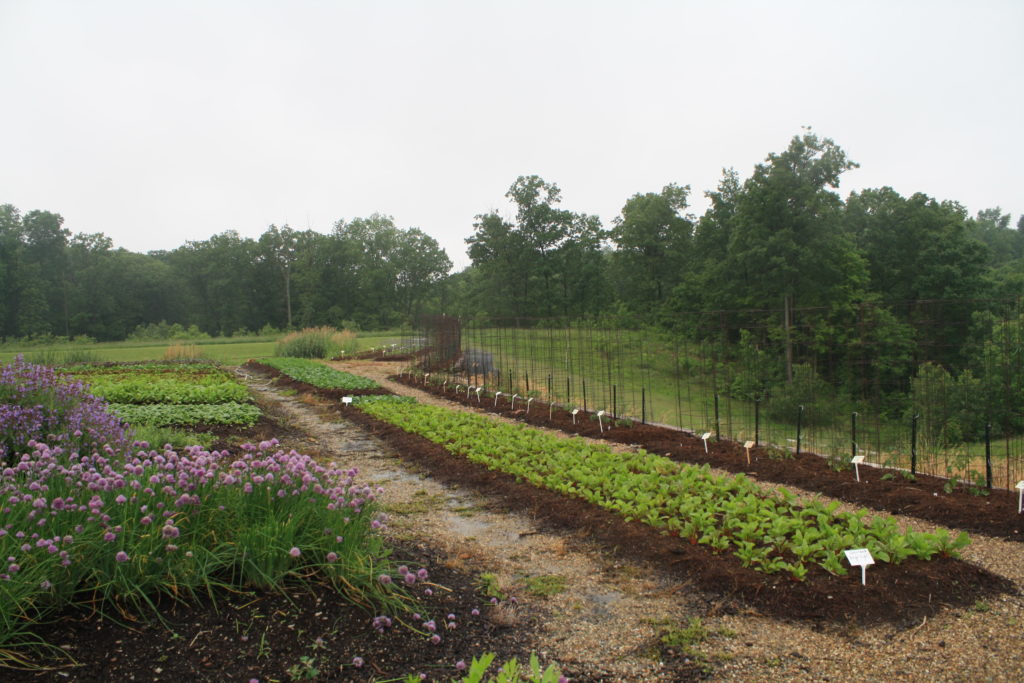 If I start with too solid of a plan, I feel anxiety because it walls in how things have to happen and when you’re working with growing crops, they change.

So your plan (and menu) has to be flexible and fluid.  For me, I rather get the product going and growing and then see where that leads us.

That’s one thing about chefs in general, we’re very Type A personalities.  We’re like “things need to be this way and it needs to be perfect all the time” and a farm just doesn’t allow for that.  It’s absolutely a balance.

It produces what we sow, but it produces it at the rate it chooses.  It’s not up to us.  That’s why I like to get the product into the ground and then see what we get.  Then that is what takes us in the direction for the year.

And that’s exactly what happens when tomato season hits!  It gets crazy!  It’s tomatoes everywhere! 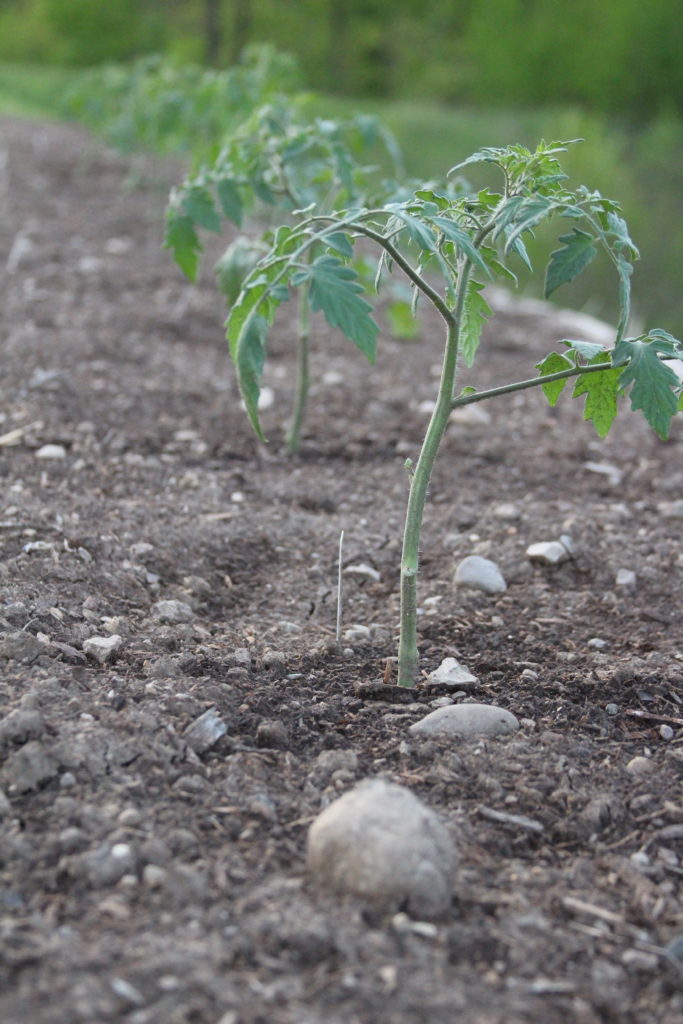 Then usually right about that same time, Schottsman comes in with loads of corn.  So we’re super tomato, super corn.  We’ve learned to flow with what’s coming on strong.

Madalaine: Do you plant anything to experiment with?

Chef Niall: Absolutely.  We always select some outliers, like an unusual vegetable that might be fun to experiment with.  We either make a small test plot or as you’re walking up to the front of Firefly, you’ll see some large pots off to the side. 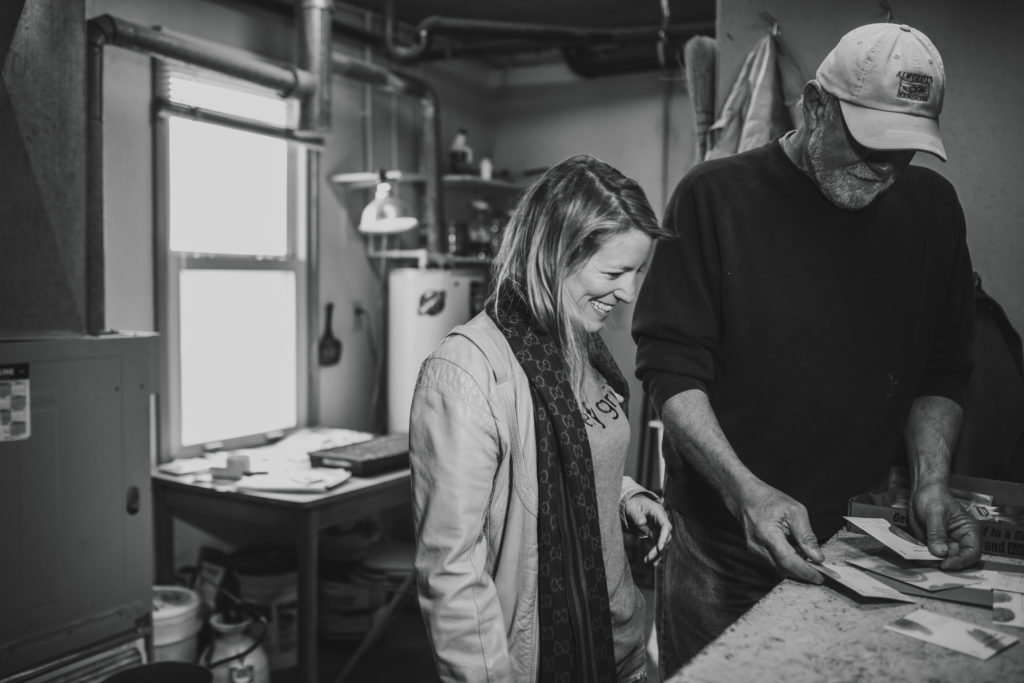 Sometimes I’ll put something in there that’s way out there or I haven’t grown a lot of before.  In fact, lemon grass was out there a few years ago and now it’s a garden staple.

We use it in a lot of our Asian dishes like our Thai meatballs and red curry soup.  It also smells nice and keeps the bugs away.  At the end of the year, we’ll cut it all back, steep it and extract all sort of flavor.

Zen and the Art of Patient Planting

Madalaine: When do you begin planting?  And what do you plant when?

Chef Niall:  We never go before April 20th.  A lot of our herbs come back year after year on their own.  We have 75 chive plants that are coming up right now. 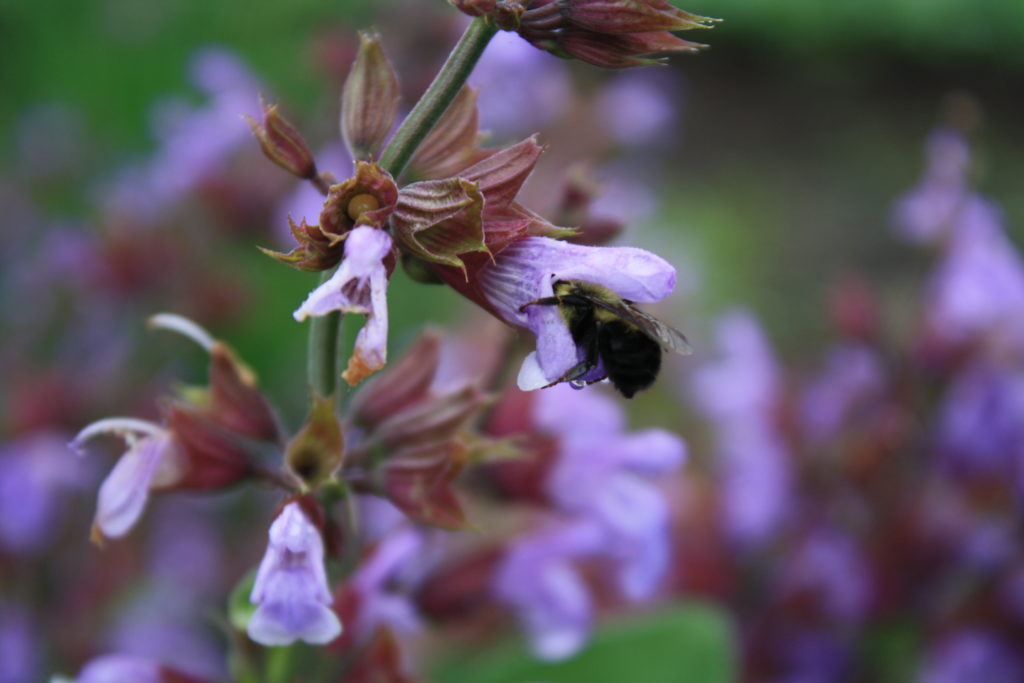 We will have to put parsley in, but thyme, oregano, and rosemary will come back on their own.  But the tomatoes won’t go in until after April 20th.

We get tricked out in this area.  March starts off pretty rough, cold and snowy but then the last couple weeks it’s sunny and beautiful.

I’m always jumping the gun right about then.  I’m like, “let’s go!  Let’s get ahead this year.”

Then our head gardener is like a zen sensi master saying, “No.  You never put in until after April 20th.”  Then sure enough, a week later we’ll get hit with a big snow storm.

We’ll sow our lettuce seed and put in our tomato plans after April 20th.  Then we’ll let our lettuce grow out, utilize it and then we’ll probably go ahead and plant it again.

We also grow carrot, beets and something else that has a 50-70 harvest turn around cycle. 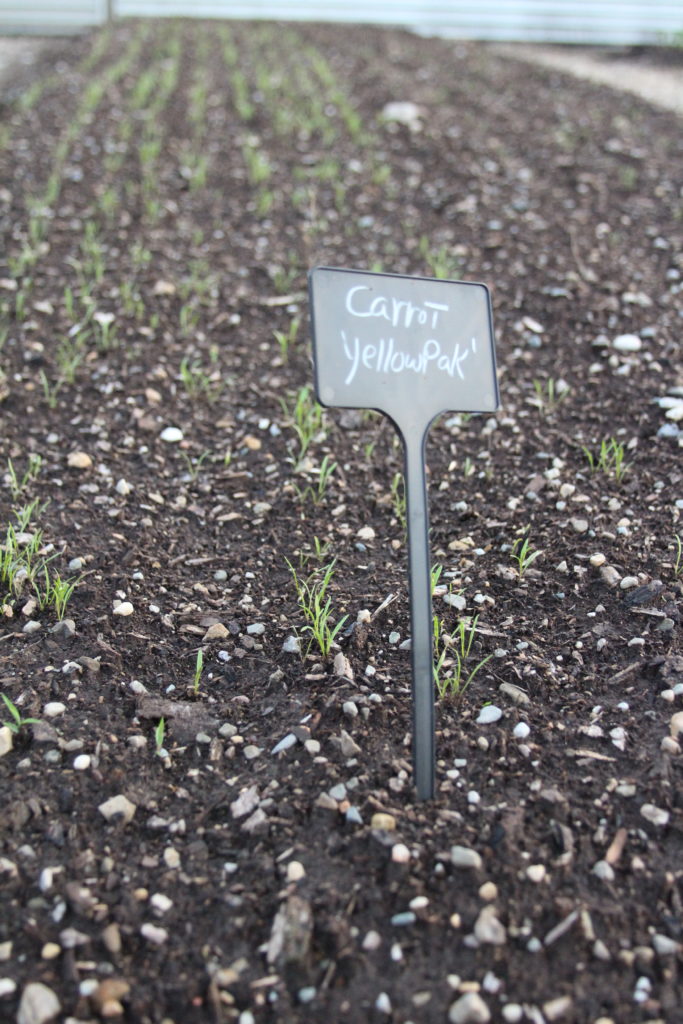 Of course we grow a ton of squash and zucchini blossoms for our stuffed blossoms. I put those on the menu years ago on a whim and who knew they’d take off?  People went crazy for them!

I did it because we had so many blossoms because they were a by-products of the vegetable.  Now the summer squash and zucchinis are the by-products.  Who knew!

Then we’ll do eggplant and cucumbers.  We try to keep all of our rows busy through the whole season.

We’ve been really blessed, so lucky, we haven’t had any problems with blight (knocks on wood), and that has to do with crop rotation.  We haven’t been hit hard with pests or deer. 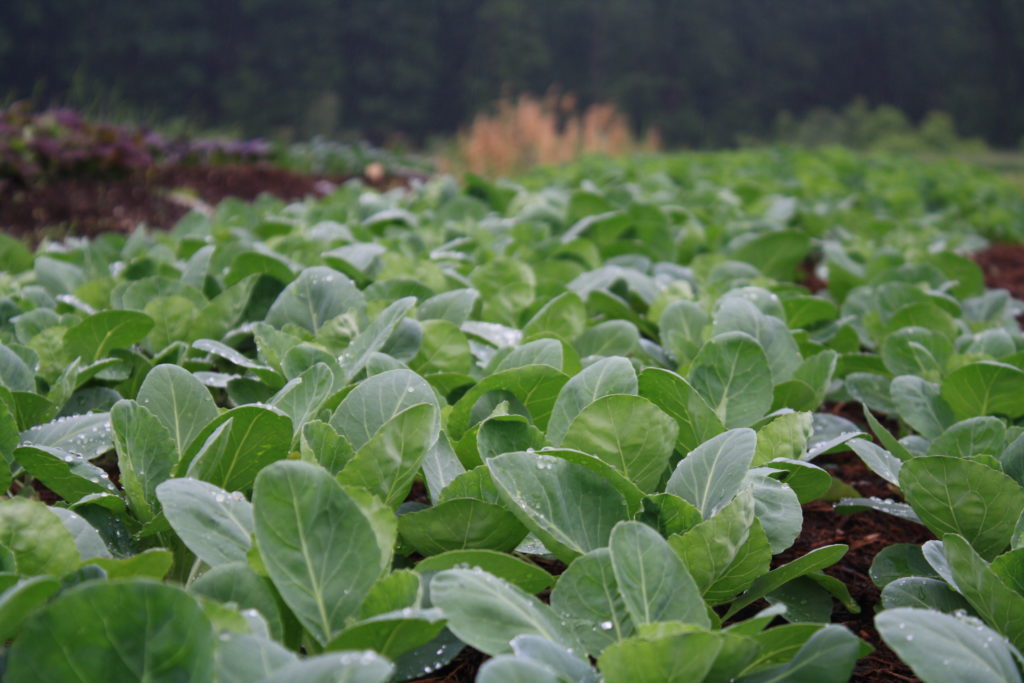 Madalaine: Lord knows we have plenty.

Chef Niall: Yeah, I know there’s a ton.  But you know I think the thing is, the fields around here are so rich in corn why should they come over here and eat something healthy. (laughing) Why not just eat the sugar?

Madalaine: What are some of the things you buy?

Chef Niall: Things like cilantro, citrus and potatoes are just way easier to buy.  Corn, we get our corn from Schottsman.  It takes up a lot of space to get a little bit of corn.

We try to get as much as we can locally.  It’s about finding a balance that works.

Madalaine: You said earlier that farming was unpredictable.  Does any particular occurrence come to mind?

Chef Niall: Oh sure.  We grow a lot of green bell peppers and just a lot of different peppers in general.  One year we grew some really hot peppers right in the same row as the bell peppers and somehow everything had cross pollenated.

So we had all of these bell pepper that would just melt your face off they were so hot.

Everyone’s working with bell peppers, eating them and they were like “Oh MY! These are so HOT!!!”  (laughing) That was a mistake, but that’s how you learn. 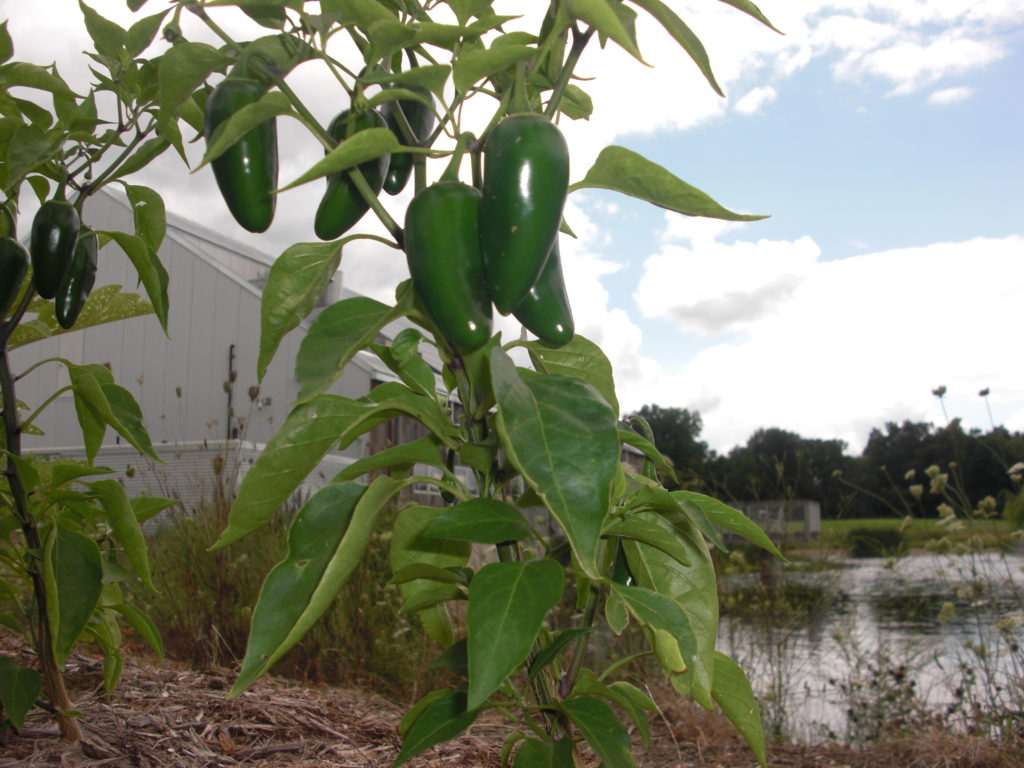 Fooled You jalapeños have all the flavor without the fire

We do jalapeño poppers because people just go crazy for them.  So now we grow a jalapeño brand called Fooled You.  They have all that great jalapeño flavor and just a tiny bit of heat.

Those have prevented problems because even when you’re growing mild peppers some can be very strong.  We learned our lesson and now we only grow Fooled You peppers.

Future Plans for the Farm: expansion, geothermal & year round farming

Madalaine: So what’s in store for the Firefly Farm?

Chef Niall:  We’ve been expanding little by little, plot by plot.  Last year we grew winter squash and it did ok, but we knew we were going to get iffy stuff because they were in new plots.

We knew that because those plots didn’t have the nutrients needed to get a hearty crop.  But that’s all part of the process. 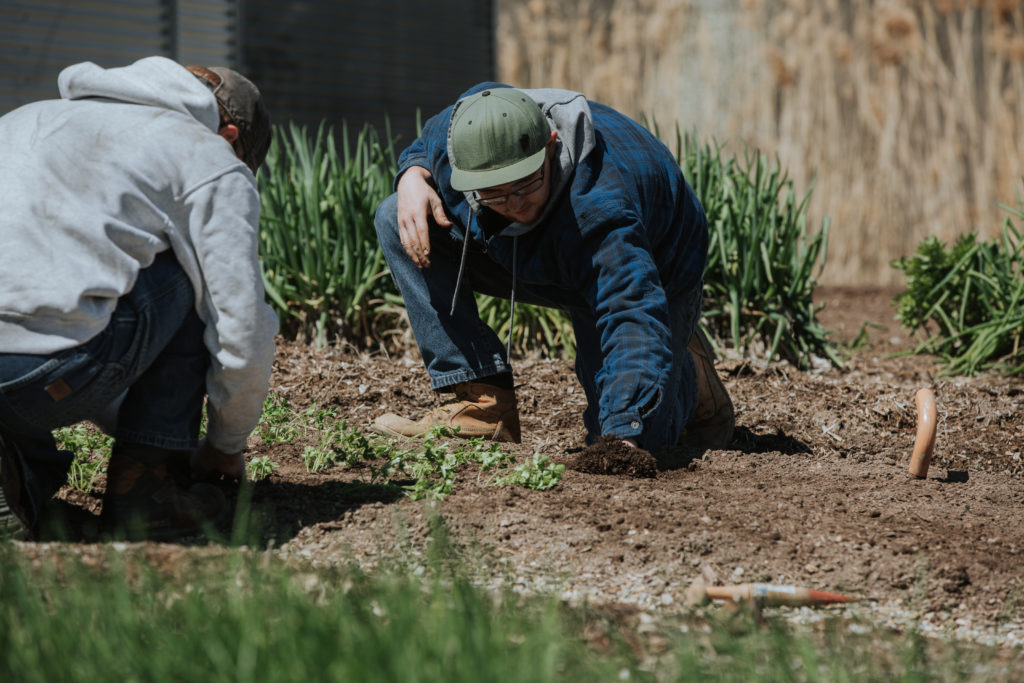 We’re looking at putting up a hoop structure as a 20,000 square foot greenhouse across the pond.  But we’re also exploring piping in pond water underground almost like a geothermal effect.

The pond water just under the surface is about 60 degrees.  We want to create a loop that goes underneath the pond that circulates so that the ground under the hoop is 60-65 degrees all year round.

This will let us get our own starters, all our seeds and start our growing season in February. 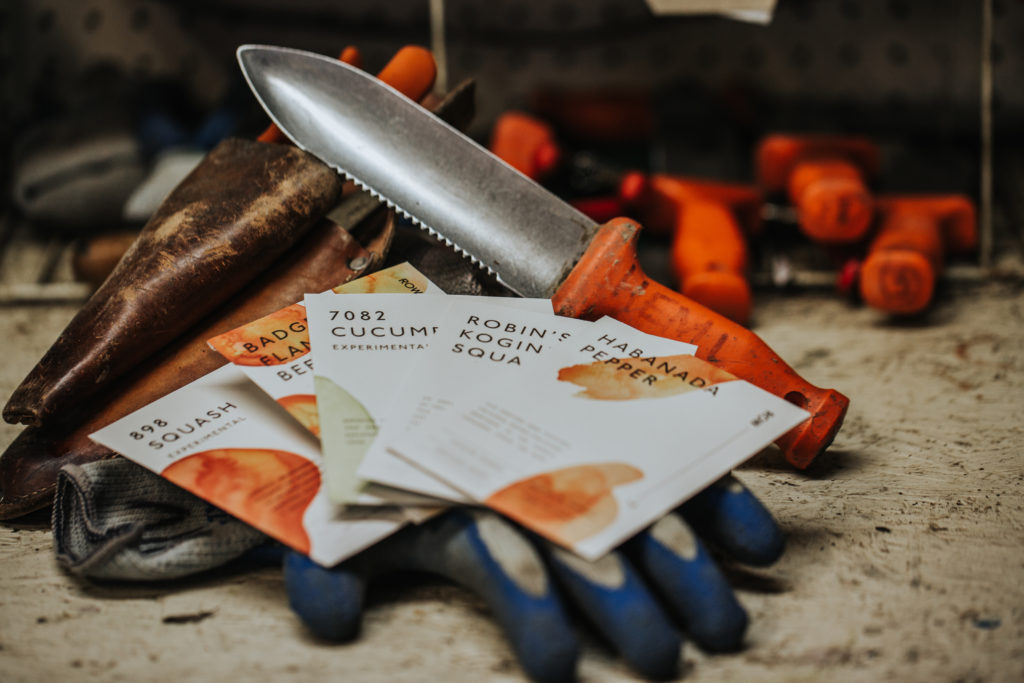 Creating the Farm to Fork Experience

Madalaine: Running a restaurant is a lot of work and so is farming.  What on earth made you and Kristie decide to create a farm to fork restaurant?

Chef Niall:  The primary reason we started the farm was because we wanted the best and freshest produce we could get our hands on.  That was the major drive to put the food in the ground to begin with.

The other aspect we soon learned was cost.  A pound of chives costs the restaurant $16.  From April to November we grow all of our own chives.  So the economic aspect of the farm is huge. 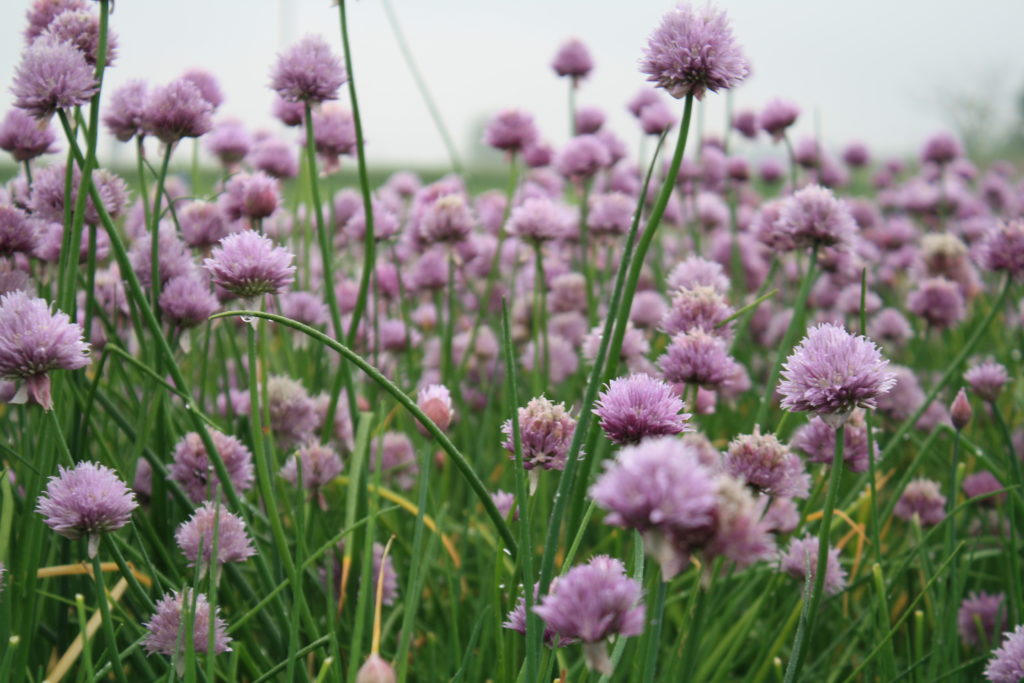 The farm allows me to use ultra fresh, awesome ingredients for the same price I can get off the back of a truck.

That makes it all the work worth it. 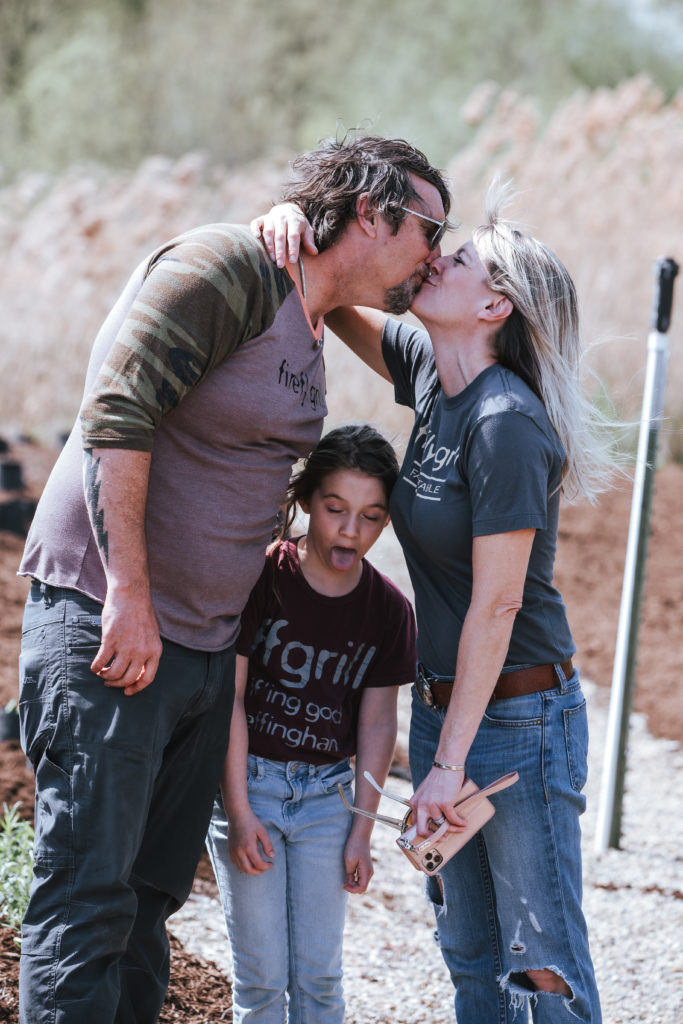 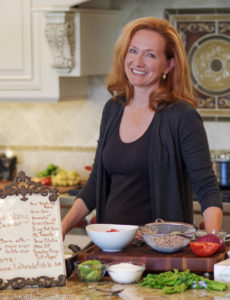