I love Homemade Egg Nog.  Honestly, I like store bought too.  With or without booze.  It’s rich, creamy, sweet, and I love LOVE nutmeg.

How to Make Homemade Egg Nog

Here’s a straight forward recipe that will get you in a festive holiday spirit!

People were making an early version of this homemade egg nog as early as the the 13th century in monasteries.  It jumped the pond in the beginning of the 1700s.  It was a big hit in the colonies, because back in England only the wealthy could afford milk, eggs and sugar.

In the new world, cows and chickens were abundant.  Sugar was also a growing commodity thanks to the Caribbean which also brought rum up the coast.

Our Founding Fathers were Fans

George Washington even jotted down his own famous heavy-on-the-alcohol egg nog recipe. Only he forgot to record the exact number of eggs. Cooks from that era estimated a dozen would do:

Regardless of if you’re spiking your nog or not, please drink responsibly.  And not just for the alcohol content, each 8 ounce serving has a whopping 500+ calories!  No wonder we only splurge on this once a year. 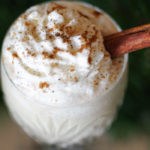 The egg nog recipe isn’t just for the holidays.  It’s rich, creamy, and spiced up with vanilla and nutmeg.  Add an extra kick with a good glug of bourbon or keep it as it is.  You can’t go wrong either way.  It’s hard not to try to lick the bottom of your glass!

Egg whites- Traditional egg nog incorporates whipped egg whites.  If you’re concerned about raw egg whites, use cartoned egg whites. If you’d like to make it this way, whip 3 egg whites with a tablespoon of sugar until they form stiff peaks. Fold the egg whites into the yolk/milk mixture and serve.

This makes the egg nog nice and thick.  Personally, I think the whip cream achieves the same effect and then I’ve got whites for breakfast in the morning.  Plus, I can get it in the glass faster this way too. 🙂