Piri Piri Chicken (also known as peri peri sauce) originates from southern Portugal.  Although variations of it abound, the common elements found in most recipes are: hot pepper (piri piri or bird’s eye chili), citrus, oil, and red pepper.  For me, I can’t think of piri piri without paprika.

I ran across Jamie Oliver’s recipe for piri piri chicken and it was the first time I’d seen a recipe call for so much paprika.  I’ve always had paprika but only used it to dust the tops of deviled eggs.  Now it has a real purpose, piri piri purpose!

How to Make a Perfect Piri Piri Chicken

The Sauce ~ break out your food processor!

Even though Piri Piri Chicken does not originate from Hungary, I associate this country with this dish because paprika is so Hungarian.   Before it goes into the oven it smells of bright lemons with deep under tones of onion and smokey paprika.

This recipe uses an oven not a grill and a food processor.  This makes it quick and easy, as well as eliminating having to light up the gas grill and do a lot of dishes.

If you want to play with fire, here’s a way to get the most out of this recipe!

Step 1: Use chicken that is not skinless.  The skin acts to keep the chicken juicy and protects it from burning, plus the extract fat adds tons of flavor!

According to food scientist Harold McGee, marinading the chicken for more than 2 hours in a sauce with this high of acidity from the lemons can leave the chicken mealy without adding any additional flavor.

When you’re ready to grill: discard the used sauce, place the chicken skin side down and baste it with the remaining marinade.  You may want to also brush it with a little olive oil to give it an extra little char.

Take the chicken off the grill when the internal temperature reads 160, place chicken on a baking sheet and cover with foil for 5-10 minutes and serve!

What to serve with Piri Piri Chicken

Here are some food and wine ideas you can serve with your piri piri chicken.  Wild rice, cous cous or a Mushroom Rice Pilaf are great choices.  A vibrant side salad (like my garlic parmesan salad) and broccoli go well with this dish too. Ratatouille or braised asparagus with cherry tomatoes and feta cheese are colorful sides and would hit the spot as well.

I’m not big on sweet wines, but they do go very nicely if I’ve gone heavy on the red pepper flakes.  If you like your Piri Piri on the spicy side try a dry Reisling or if it’s not too spicy a Vinho Verde is good with it too.

When it comes out, the onion has mellowed and joined with the paprika and lemon that strikes just the right balance with the basil.  Don’t leave the basil out of this party.  She’s that key component that you don’t really notice unless she’s not there.

Tip: write this recipe down on a 3×5 card and hide it in the pantry or kitchen drawer.  Make sure your sweetheart or kids are near by so they can see how cool you are.

Start throwing everything into the blender (don’t let them see you use the recipe).  Blitz – Pour – Bake!  Presto!  You are a superstar!!!  Didn’t even need a recipe.  Boo Yah!

Just pulled that one right out of the air.  Oh yeah, you totally rock!

What is Piri Piri sauce also used for?

This sauce is also excellent on beef (like skirt steak) and it’s widely used on fish too.  However, I have one recommendation if you are going to use it with fish.

When using this method with fish, put the sauce in the the casserole dish first and bake it in the oven for 40 minutes at 350F without the fish.  Then add the fish and cook until it’s done.  Fish cooks very rapidly and will be done before the sauce has a chance to completely meld and come together.

How do you know if your fish is done?  Typically, at 350F bake fish for 15 minutes per 1/2 inch at it’s widest width.  When the fish is cooked thoroughly, it will be flaky and opaque.

Inspired by The lights of Budapest

The paprika turns this sauce a deep crimson that takes me back to the Budapest Grand market.  And nobody does paprika like the Hungarians.

When Jerry and I visited Hungary, I was completely unprepared for the grandeur of Budapest.  It began as a Celtic settlement and then grew into a Roman capital around 103 A.D. The Huns came into the area during the 9th century, hence the name Hungary.

In 1241 the Mongols sacked the city and it wasn’t until the 15th century that it flourish once again as a Renaissance cultural center.

Seated directly on the Danube, I was awed by their state buildings.  They are huge and magnificent.  The parliament building was built in 1904 when Hungary was 3 times the size it is now.  Pictures can not do them justice.

To the west, Parliament stands completely lit and reflected in the night’s black water.  To the east, is the cathedral and medieval walls also glowing with golden light.  Spectacular.

Budapest is cited as being one of the most beautiful cities in Europe.  It also ranks as one of the highest on the EIU’s best quality of life indexes, Conde Naste gives it the #2 spot for “World’s Best City,” and Forbes touts it as Europe’s 7th best place to live.

Believe the hype.  It’s reflected in the people.  They are absolutely genuine and very nice.

You could loose yourself here for days and days.  On one side of the river (old Pest) you wander narrow medieval cobblestone streets.

On the other side (Buda), it’s the height of Victorian architecture and my favorite… The Grand Hall Market.  YES!!! 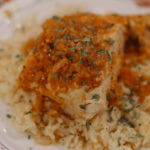 Serve over wild rice, white rice, or cous cous.  A side salad and broccoli go well with this as would a side of ratatouille or braised asparagus with cherry tomatoes and feta cheese.

I’m not big on sweet wines, but they do go very nicely if I’ve gone heavy on the red pepper flakes.  If you like your Piri Piri on the spicy side try a dry Reisling or if it’s not too spicy a Sauvignon Blanc is good with it too.